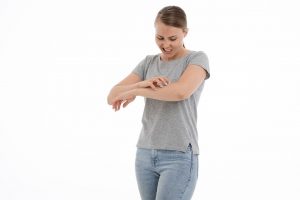 The skin is considered the largest organ of the human body. Being the largest and most exposed to the outside, it can be affected by many diseases and conditions. One such condition is Eczema which is mainly characterized by patches of our skin that are becoming inflamed, dry, itchy, and rough. When Eczema arises due to the immune system, the condition is known as ‘Atopic Dermatitis’. Here is a rundown of the condition including its symptoms, causes, and treatment.

Aside from the red patches that form in the patient’s skin, blisters can also be observed in these areas. Though symptoms may vary on a person’s age, having these red patches is the most prevalent symptom common to most or all of them. Atopic dermatitis is more common in infants and children below 5 years old, half of which carry the condition towards adulthood. There are periods wherein the patient will experience the worst of the symptoms, while there are also periods wherein their condition will improve or their skin will no longer flare-up.

The location of the patches can vary depending on the patient’s age. For infants and toddlers below 2 years of age, the disease typically exhibits itself in the form of rashes on the scalp and cheeks which swell up and excrete fluids. Meanwhile, for kids from 2 years of age until puberty, these patches are often found behind the elbow and knee creases. Lastly, for adults, they can develop on the nape of the neck. These rashes are described to be ‘extremely itchy’ in nature, interfering with a person’s sleep cycle. Skin infections may also arise due to excessive scratching.

Currently, there is no definitive root cause yet for Eczema. However, it has been studied and found to be genetic and can also be triggered by environmental factors. It is not a contagious condition. Children who develop the disease often have parents or relatives that also have the condition or any sort of atopic disease. Certain substances in the environment are known to trigger the symptoms when the patient is exposed to them. These can include irritants such as soaps and detergents with strong ingredients. Certain bacteria and fungi are also known to make the itch worse. There are also certain foods that can aggravate itchiness such as dairy products, eggs, and nuts. There are a lot more possible external triggers that those with the disease should be familiar with.

As of now, there is no cure yet for eczema. Treatment focuses on alleviating symptoms and preventing triggers depending on a person’s age, health, and severity of patches on the skin. Doctors can prescribe creams and ointments that are anti-inflammatory to soothe itchiness. They can also prescribe antibiotics and antifungal treatments in case of bacterial and fungal infections developing on the rashes. Moisturizers are also vital to promote restoration of skin areas that have been damaged due to excessive scratching.

At home, the patient can take extra steps for self-care. To bring back moisture to their skin, they must apply moisturizers regularly and take lukewarm baths using mild soaps that do not have harsh ingredients. They must take note of external triggers that worsen the condition so that they know what to avoid. They must also take care not to perform activities that will make them sweat excessively.

While eczema has some serious effects on a person’s skin, it can still be treated to provide relief to those affected by it. Proper knowledge of the condition, its triggers, and treatment are vital to be able to adapt to live with the disease.